Bad Hofgastein is old spa resort in the centre of one of Austria's largest ski areas, the Gastein Valley. The area is famous for its thermal healing water, accessed by several spas as well as the huge and varied ski area linking several resorts in the region. 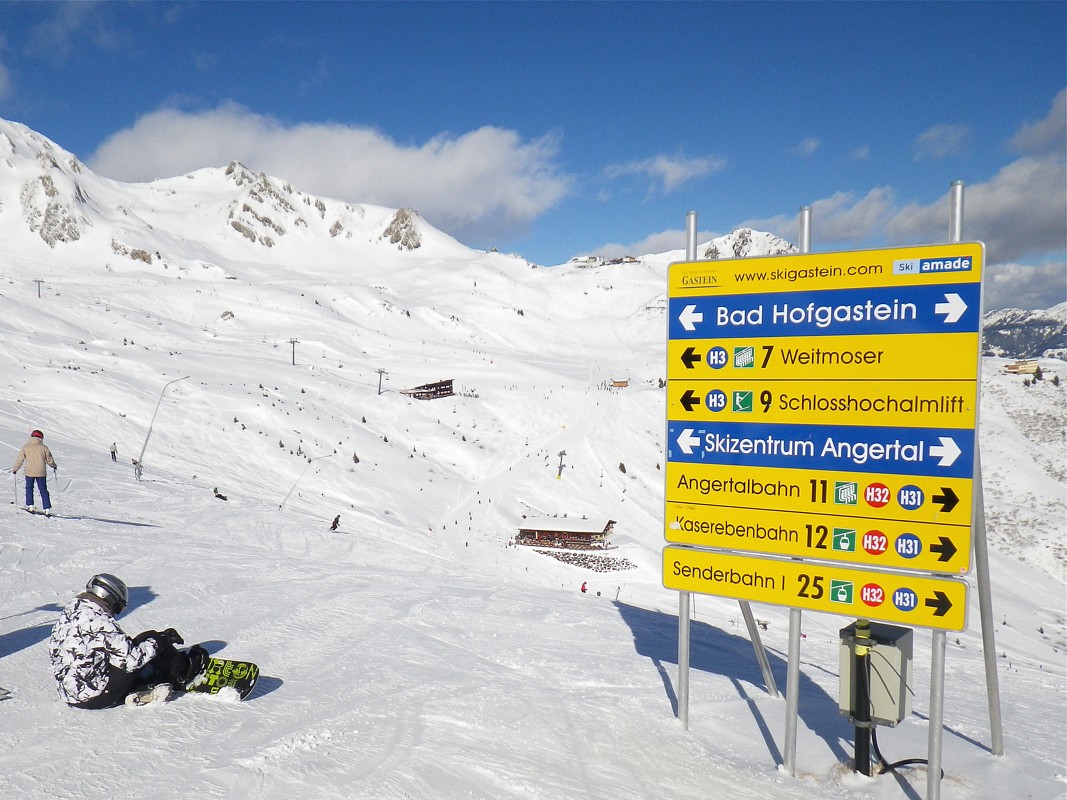 The old village has a pleasant pedestrianised centre and a good range of restaurants, shops, hotels and other facilities to cater for most holiday needs. The centre is dominated by the Pfarrkirche church, built between 1498 and 1507. At its heart is a magnificent baroque altar which entered the annals of art as the great masterpiece of the painter Josef Andrä Eisl and the sculptor Paul Mödlhammer. Skiing came to the area in the difficult years straight after World War 2. The first lift, the "Haimalm" on the "Graukogel" was finished on the 30th December,1945. Chairlifts and then gondola followed over the next decade. After the building of the new Nassfeld alpine road (1970 to 1972) the area was finally joined together around Nassfeld for winter sports; the region "Sportgastein" was created. The Alpine World Ski Championships were staged here in 1958 when Toni Sailer (Austria) won three gold medals (Downhill, Giant Slalom and in the Combination. The Healing effect of Gasteins Thermal Water is due to its Radon content. Therapies range from classical Thermal Baths to the Gastein Healing Gallery and the Steam Bath. Gastein's more famous bathing visitors have included presidents, kings, queens, emperors, empresses and prime ministers from dozens of countries around the world. Of particular note Mozart's mother in 1750, followed by his widow nearly 90 years later in 1839, Johann Strauss in 1850, Mrs. Winston Churchill in 1912, during the Second World War Emma Göring, the wife of Nazi party member Marshal Hermann Göring who often visited his wife here while she was having a cure, as well as propaganda Minister Dr. Goebbels who came to Bad Gastein twice. Film Stars such including Douglas Fairbank Junior. with his family in 1950 and Thomas Mann a year later. The area was once famous for gold mining, originally perhaps by Celts, more than two thousand years ago and then by the Romans. Gold was said to be only about five metres below the surface.

An old spa village in the centre of one of Austria's largest ski areas, the Gastein Valley. The area is famous for its thermal healing weater, accessed by several spas as well as the huge and varied ski area linking several resorts in the region, with runs up to eight kilometres (five miles) long.

The Gastein ski area, one of Austria's largest, is separated in to five ski areas, rising up to 2,700 meters in altitude, served by three resorts and several small additional lift base areas. With over 200 prepared pistes between them this is one of the longest and highest Austrian ski areas with a big choice for everyone from beginners to experts.

The ski area directly above Bad Hofgastein is based on the Schlossalm which is more-or-less lift-linked to Bad Gastein, the biggest settlement in the valley, via the small Angertal Ski centre. This takes you to the largest of the ski areas on the Stubnerkogel mountain above Bad Gastein. 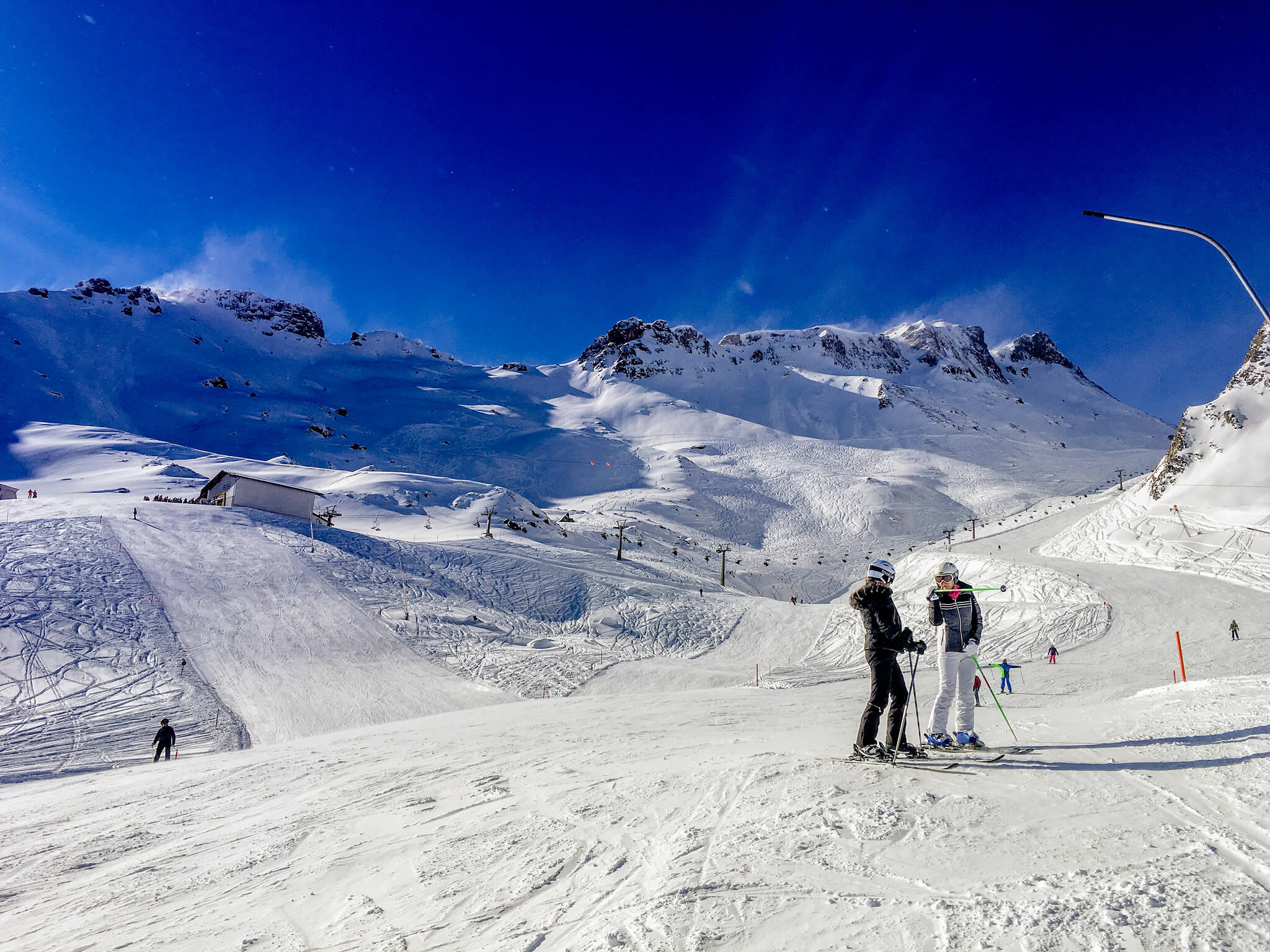 Beginners are likely to start off on the Angertal area, reached by ski bus from the resort.

A second lower area, reached by train or bus down the valley, links Grossarl (in the next valley) to Dorfgastein at the bottom of the Gastein Valley and a short ski busride down the valley. The ski link is over the Kreuzkogel Mountain (2027m). The third and highest ski area is the small sector above Sport Gastein which has a base at 1600 metres and a snow-sure top lift at 2685m on the Kreuzkogel mountain. The off-piste powder trails down from here are particularly highly regarded.

So you may choose between the ski circuit connections of Stubnerkogel-Angertal-Schlossalm and Dorfgastein-Großarl, the world championship area of the Graukogel and the high alpine Sportgastein. Free guided tours to help you make the most of the area are offered to Guest card holders staying in local accommodation. There are also weekly ski races for guests. The high altitude terrain and extensive snow making cover mean poor snow cover is rarely a problem here.

More advanced skiers will probably tend towards the blacks on the Stubnerkogel and guides can often find good off piste powder runs down from Kreuzkogel.

If the whole Gastein Valley doesn't offer enough challenges you'll find its part of the Ski Amade ticket, one of the world's biggest ticket systems, which offers skiing at two dozen ski areas in the region - best bring your car. 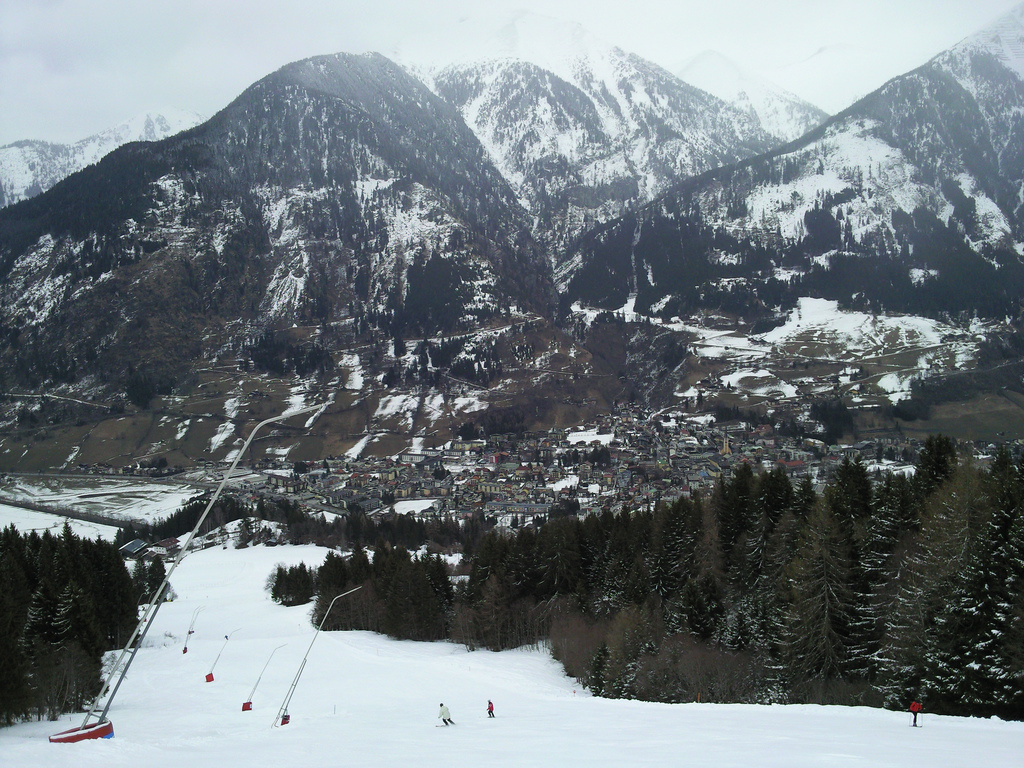 The family that skis and skis together, stays together …and there aren't many places better for that than Bad Hofgastein.

To ease the financial burden the resort also offers a Family Bonus which gives extra scaled discounts for children aged up to 19 when a family buys lift tickets together, including free tickets for the third and subsequent children when a family of five or more buy tickets. During the low season at the end of March and in April terms get more generous still with free ski passes for children aged up to 15, even when the family group is three or four, when purchased with their parent's ticket. Discounts extend to ski school, ski hire and even mountain restaurant bills as well as the lift tickets.

Childcare is available at Angertal from age two years, six months with the Schneesportschule Gastein. There's an 800 square metre Kids park there. Several ski schools offer special children's classes from age four for skiing and from age six for boarding.

One unusual attraction is the Fun Center for kids and teens, 2200m up on the Stubnerkogel. This has a kid's cinema, ball pool, Sony play stations and free internet access. 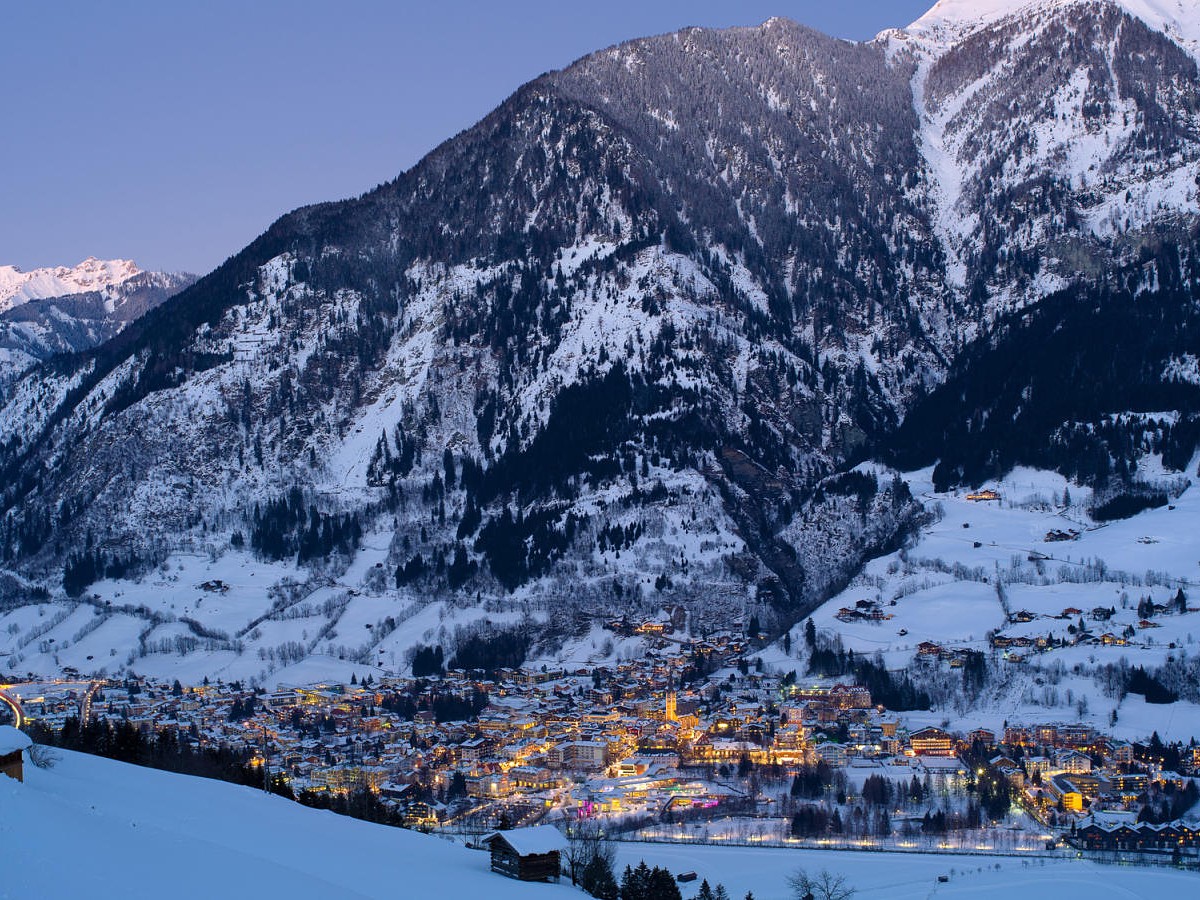 As Bad Hofgastein is quite a large resort, there are dozens of places to eat, with an onus on both traditional Austrian food and healthy eating to compliment the healthy mountain sports and thermal springs.

Several establishments also reflect the sophistication and long history of the resort, for example the Mozart café in the Hotel Astoria. The Gasthof zur Alten Post by the church is another of the many serving traditional Austrian food. There is a good choice beyond the staples however, even a rare ski resort vegetarian option Kraut & Rüben on Pirkerstrasse.

Bad Hofgastein's pedestrianised centre has a good range of bars and cafes such as the Röck which serves high value meals. For a particularly high brow evening's ambience try the Girardi piano bar in the Grand Park hotel. There are also several sophisticated night clubs for night owls. Remember to try the locally bottled Gastein spring water.

Other après options include a billiards hall, toboggan evenings and trips to the casino up the valley in Bad Gastein. Or just hit one of the many pools. 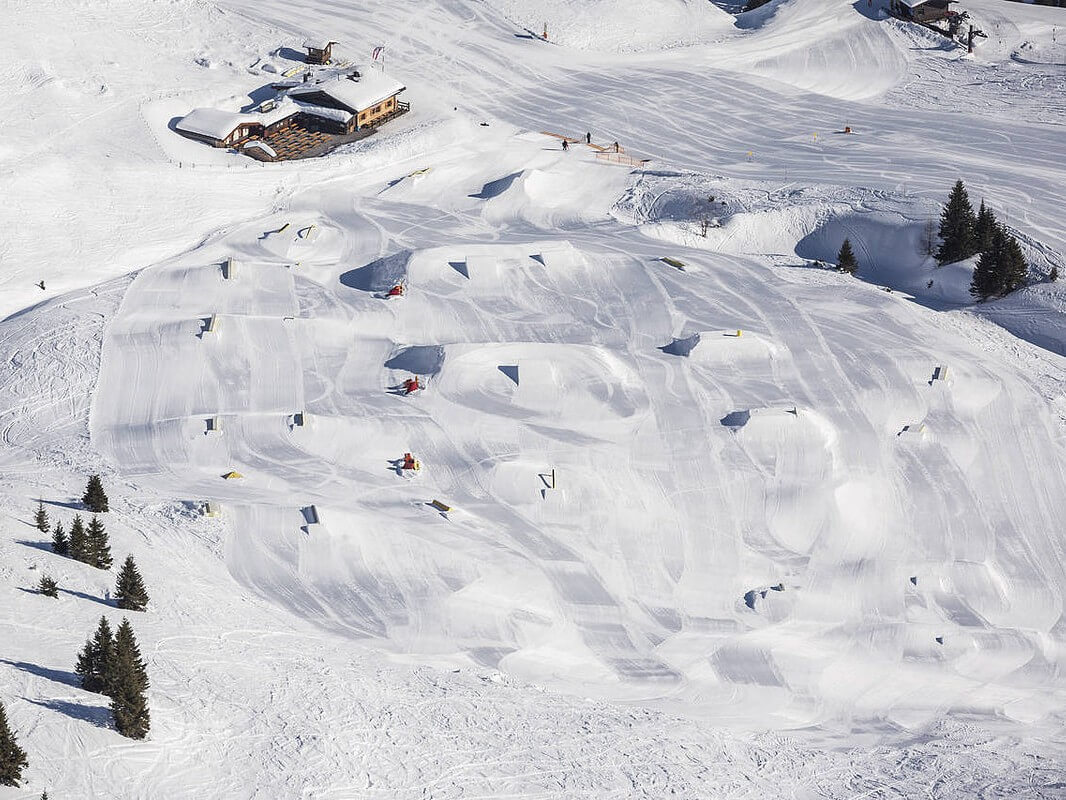 In this large area, which has hosted world Cup boarding events, there are plenty of deep powder pistes (hopefully) for freeriders to enjoy. For freestylers the Funpark "Boarder's Paradise" on the Dorfgastein - Grossarl link is located on the Grossarl-side, near to piste number 9.
Both ski schools at Bad Hofgastein have snowboarding classes from ages six and up, teaching everything from beginners to experts both park and piste technique.