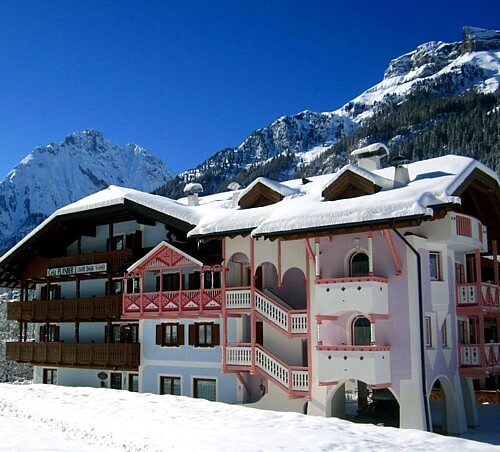 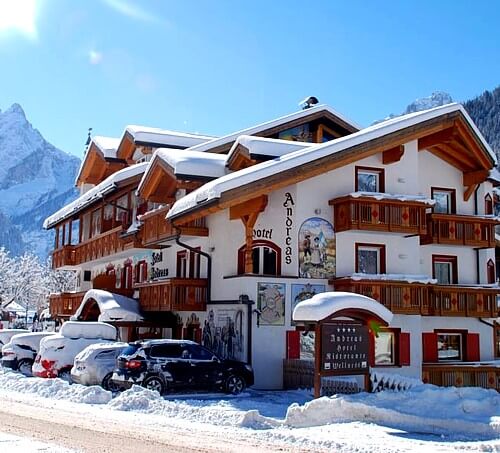 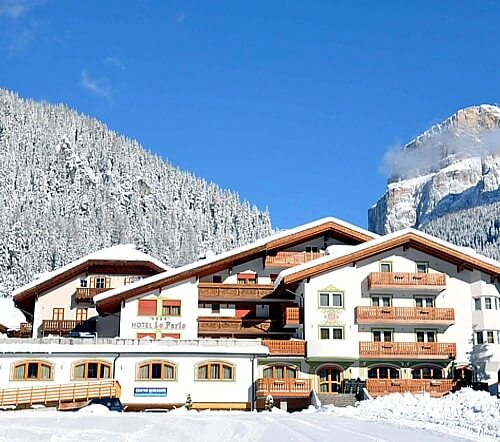 Canazei is a city in Trentino-Alto Adige, Italy. It is located in the Val di Fassa valley of the Dolomites mountain range. Canazei is a well known ski town, and the Belvedere ski area above it is part of the Sella Ronda ski circuit. It is well connected to the adjacent valleys Val Gardena and Arabba and is part of the Dolomiti Super-Ski skiing area.

The ski area of Canazei is called Belvedere (namely "nice view") because of the fantastic view over the Dolomites: Sassolungo, Sella, Sass Pordoi, Tofane, Marmolada, Catinaccio-Rosengarten, all legendary mountains belonging to the Unesco World Heritage. Belvedere can be reached: from the centre of Canazei by means of gondola; by car along the "Road of Dolomites" (SS 48) up to "Pecol"; with the new lift "Funifor" starting from Alba and getting to Col dei Rossi. This ski resort has 18 km of slopes of each difficulty level (mostly red), the Dolomiti Snowpark reserved to freestyle enthusiasts, the Enrosadira Funpark with a track especially designed for little skiers, many hotels directly located on the slopes boasting panoramic wellbeing areas and amazing refuges with solarium terraces " to relax and lay pleasantly in the sun. From Belvedere hollow skiers con move to Col Rodella through the slopes descending to Pian de Frataces-Lupo Bianco, and then go back to Canazei along the run crossing the wood or ski over to Arabba. Belvedere ski area is also the departure point of the legendary Sellaronda, a 40 km long ski tour which is considered among the most spectacular in the world.

Col dei Rossi’s area at the Belvedere is a favourite take-off point as concerns paragliding and hand-gliding enthusiasts, who use to fly above the valley also in winter time painting the blue sky with colourful wings.

From Belvedere skiers can pass over to Pordoi Pass, squeezed between Sass Pordoi and Sass Becè, right at the border between Trento and Belluno province. From the pass the access to the Boè Group is immediate, thanks to a cable car that in few minutes reaches the 2,950 m of Sass Pordoi, a dazzlingly beautiful natural terrace offering an unrivalled all-round view over the Alps. From the summit most expert skiers can face the thrilling descent in the homonymous saddle or ski down along the wild Val Lastìes and Val Mezdì (because of the peculiar features of this tracks, they should be faced only with the right weather and snow-cover conditions and with the assistance of an Alpine Guide). The ski slopes of Belvedere are easily reachable from the pass by following the Sass Becé Tour.

As concerns those who want to stay in town, Canazei offers many nursery slopes for beginners and playgrounds on the snow for children.

Col Rodella is reachable from Campitello di Fassa by a modern 100 passenger cableway departing from "Ischia", in the town’s sports area, and goes up to the Sassolungo Group. Skiers can enjoy 10 km of runs which are served by first rate lifts. The snow making system of cutting-edge technology, guarantees a top level snow cover since the beginning of the winter season. At Col Rodella most competitive skiers will also find a "self-timer" race run, while beginners, on the other hand, can practice on the nursery slope "Col de Lin", managed by the local ski school and located on the edge of the town. Here kids will have lot of fun on snow in the Kinderpark Banzimalia or in the indoor kindergarten, near the cable car’s departure in the area of Ischia.

Col Rodella and  Belvedere-Canazei can be regarded as twin ski areas, connected by the 3,3 km red slope called "3-Tre" descending along Salei valley to Pian Frataces-Lupo Bianco on the "Grande Strada delle Dolomiti".

Col Rodella is an open gate to Sella Pass, nestled between the Sassolungo Group, its majestic towers and the Mesules ridge. As a result it is a strategic ski area: cosy refuges on the slopes, many of which are within easy walking distance, medium difficulty runs and quick connections to the Dolomiti Superski and Sellaronda ski carousels.