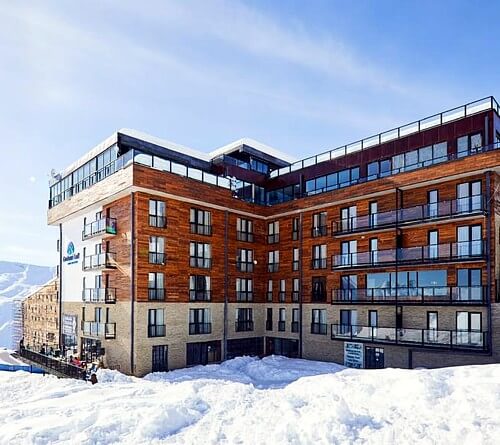 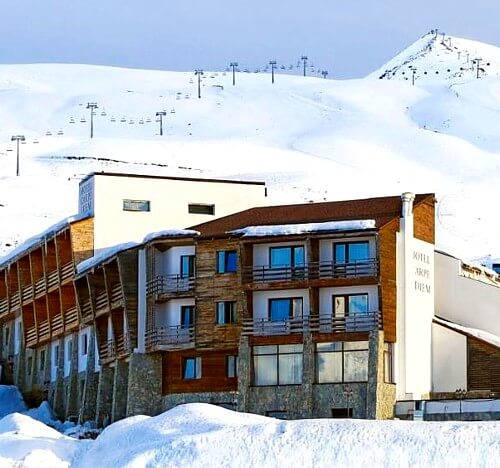 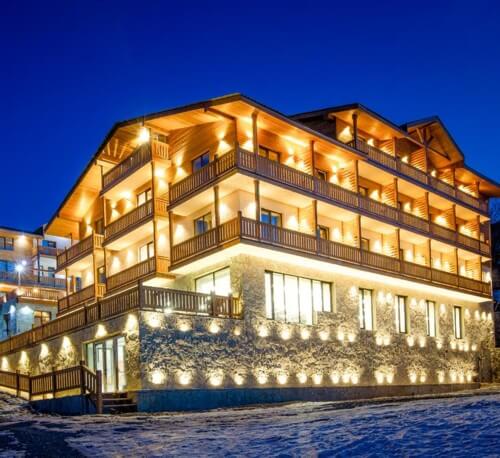 Gudauri is a mountain resort in Georgia located on a south-facing plateau of the Greater Caucasus Mountain Range, 120 km or about 2 hours drive from its capital, Tbilisi, making it convenient for short, weekend ski trips from December through April.

Valleys and untouched foothills around Gudauri offer exceptional high quality skiing opportunities. The snow can reach up to 1.5 m deep at times with good powder. The mountain’s average skiable elevation is 2,200 m above sea level, so the weather can be chaotic and extreme.

The 57km of pistes (black, red, blue and green) are served by a cable car and five chairlifts, rising from 1990m to 3285m. Normally the ski season lasts from shortly before Christmas to April, with the best snow in January and February.

Gudauri provides 14 ski lifts built by the world’s leading manufacturer of ski lifts as Doppelmyer. Lifts run every day from 10 am to 4:30 pm, regardless of the number of skiers on the slopes and usually serve 11000 visitors per hour. The bottom lift station is located at an altitude of 1,993 meters, while the upper station – 3276 m. Lifts can be closed in rare cases due to adverse weather conditions: at very low visibility and strong wind gusts.  Along the slopes and lifts free Wi-Fi connection is available.

For beginners: One bunny hill is located in New Gudauri at the base of the gondola and another is at the top of Gudaura gondola/Shino lift. Two of the chair lifts – Snow Park and Pirveli – access only green runs, perfect for learning on.

For intermediates: Gudaura gondola, Shino, and Soliko access similar terrain, all blue runs, which are great for intermediate skiers and the ungroomed areas between pistes are perfect for novice freeriders. Altogether, there are at least a dozen combinations of intermediate slopes on the mid-mountain level with a few more wedged between the advanced slopes up high.

For advanced riders: Kudebi, Sadzele, and the new lifts in Kobi Canyon access the highest elevation and steepest slopes. There are rocky chutes, drops, and deep, steep powder accessible from these lifts, as well as a limited selection of more mild terrain. In-bounds avalanches have been triggered on the steeper aspects of Kudebi, Sadzeli, and Kobi, so it is imperative to have the proper equipment and training or to ski with a guide when venturing off-piste in these areas.

Snow Park is the best for absolute beginners who have just graduated from the bunny hill, as Pirveli is often more crowded. These slopes offer a great opportunity to practice technique and train for the intermediate level.

Gudauri is famous for its off-piste opportunities down the unspoiled virgin slopes. The deep powdery snow, lack of stones, and minimal risk of avalanches made Gudauri kind of Mecca of freeriding. The resort is also surrounded by large areas with off-piste slopes for these types of riding, as the backcountry and heli-ski.

Gudauri is divided into 4 neighborhoods. Two of the names were changed after the 2017-18 season, so some websites may still use the old names. New Gudauri, Gudauri Center (formerly Lower Gudauri), Upper Gudauri, and Lower Gudauri (formerly Kumlistsikhe).

New Gudauri is quickly becoming Gudauri’s hub of activity, located at the base of Gudaura Gondola. A supermarket, several large apartment buildings, numerous restaurants, a few bars, a spa, a snow tubing hill, and plenty of ski rental shops are located in this compact and easily walkable neighborhood.

Gudauri Center surrounds the lowest elevation ski lift, Pirveli, which begins just behind Marco Polo Hotel. A few ski-in/ski-out hotels line the slopes and and more are located along the main road. Several rental shops and ski schools are located around the base of Pirveli lift, and an overcrowded supermarket, some of Gudauri’s best restaurants, and one of the only proper apres ski bars are scattered around the area.

Upper Gudauri contains several hotels, a few restaurants, and a new ski rental shop plans to open for the 2018-19 season. Shino lift is accessible by walking or skiing from most hotels in the area. Due to this lift’s recent construction, more services are likely to follow. Thanks to the slower development, lift lines are typically shorter on weekends and holidays, and the rest of the resort is still very easily accessible.

Lower Gudauri (Kumlistsikhe) is connected to Pirveli Lift via a 600 meter uphill walking path, or slightly longer by road. Due to the distance, some hotels offer free transfers to the lifts. This neighborhood currently resembles a typical Georgian village more than a ski town, but development is sure to ensue with the planned construction of a new lift in 2020. A few hotels offer relatively cheap prices and some apartment rentals are available. When snow cover is sufficient, it’s possible to ski to Lower Gudauri from the resort, though you are likely to have to dodge cows on the road.

Après-ski is a concept that is just beginning to catch on. Several outdoor bars are open next to the slopes during the day, but after sunset the options are less plentiful.

Nomad bar, at the base of Pirveli lift, pumps music from the early afternoon well into the night and is the only place where you are likely to find chacha being poured out of jerrycans to young Europeans dancing in ski boots. 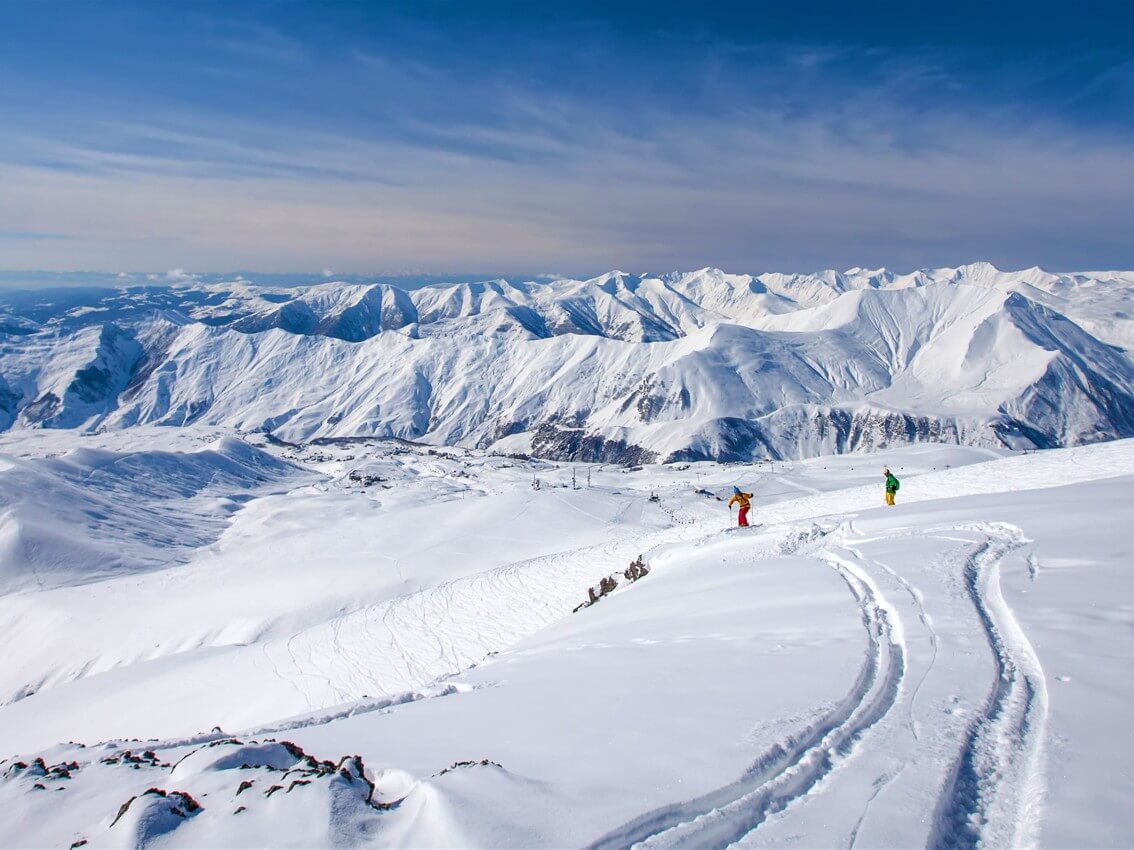 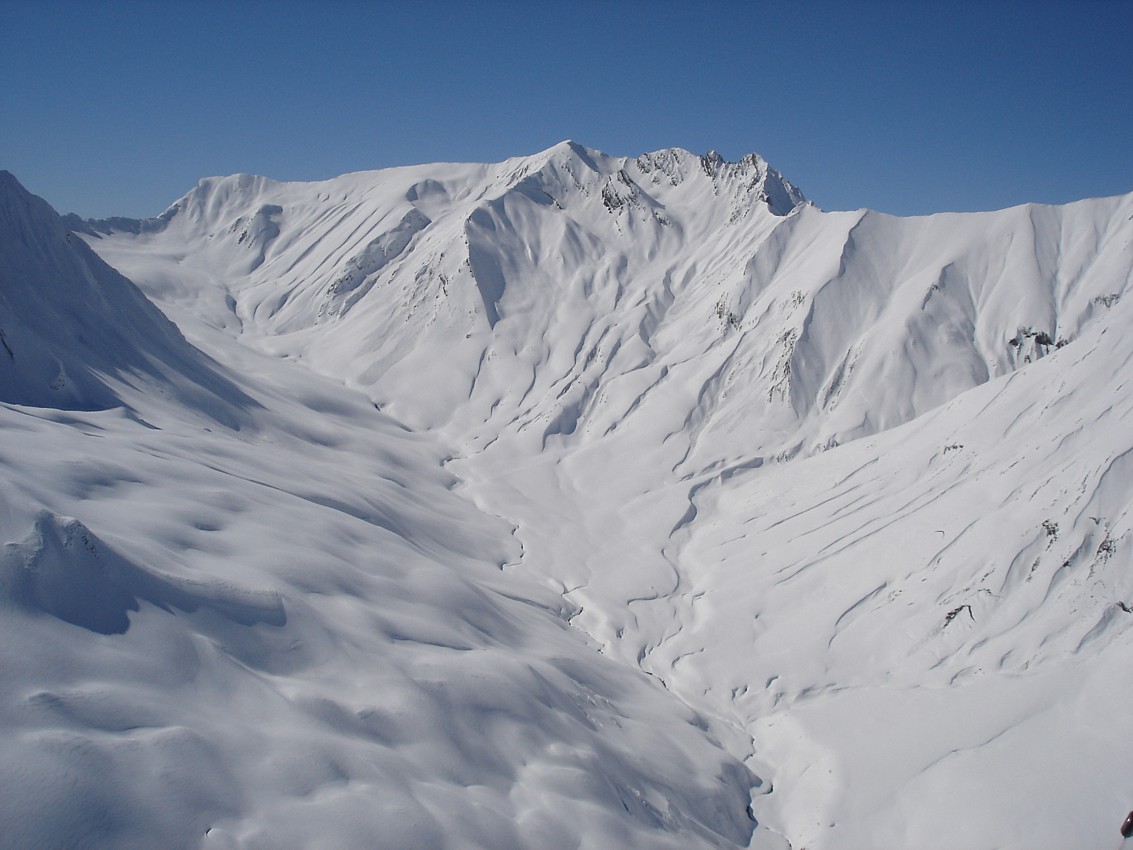 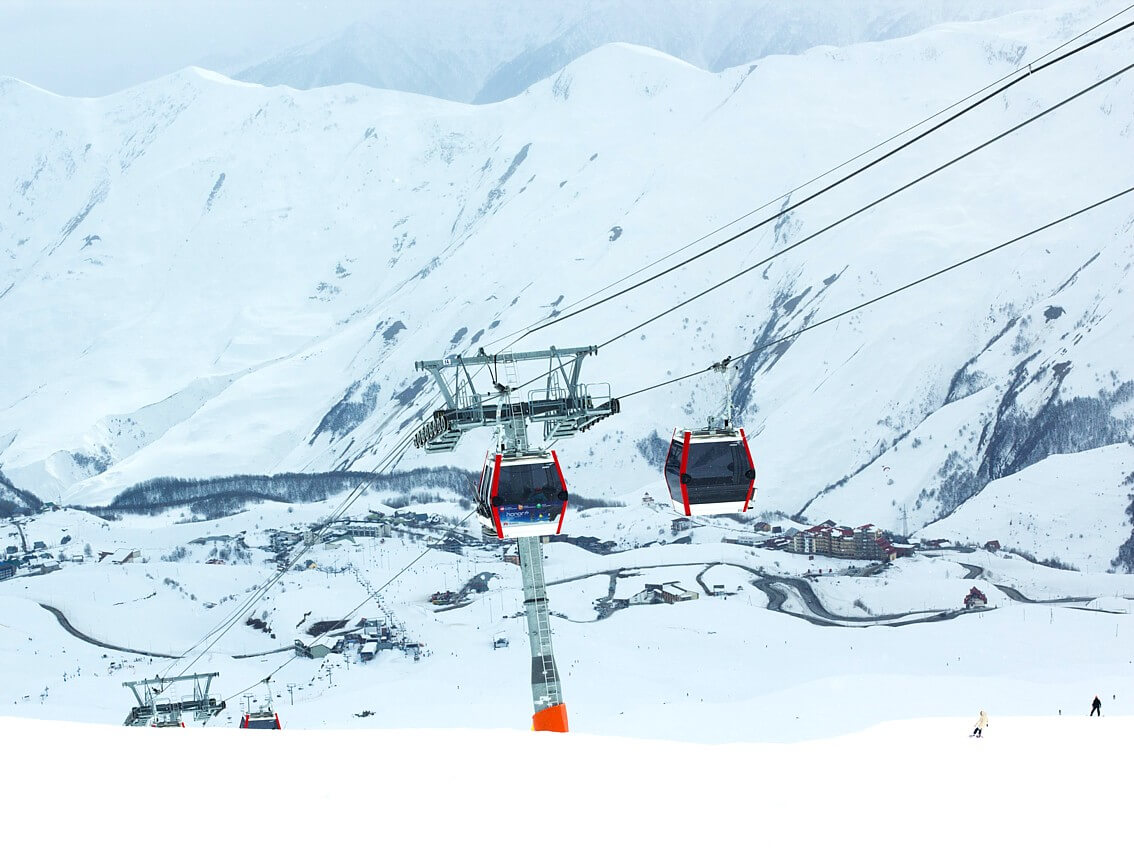 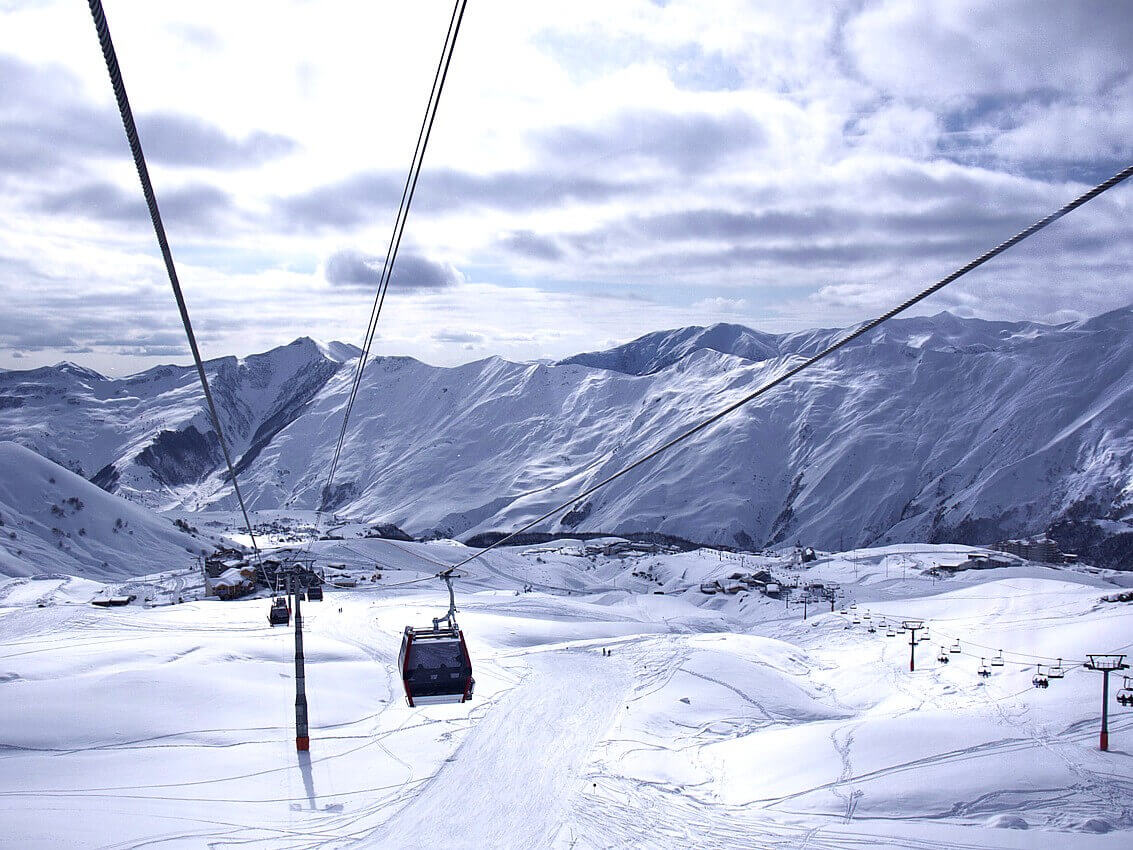 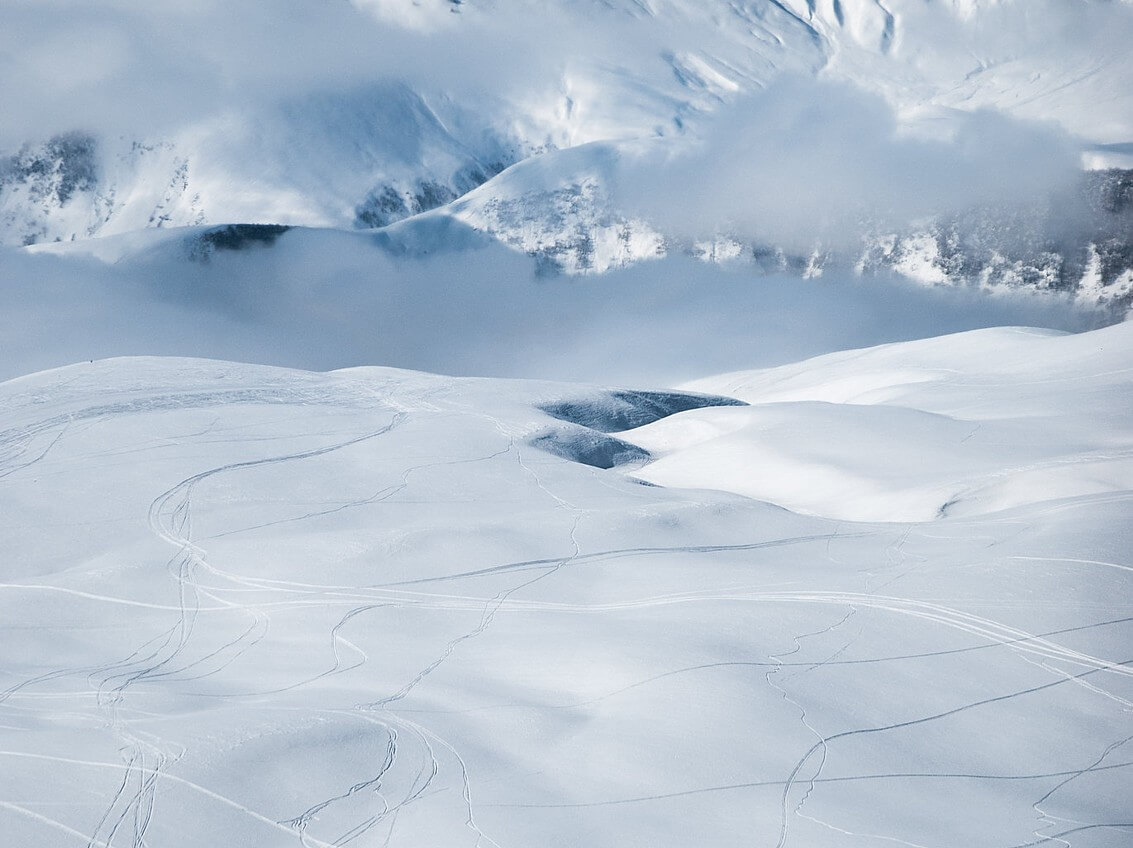 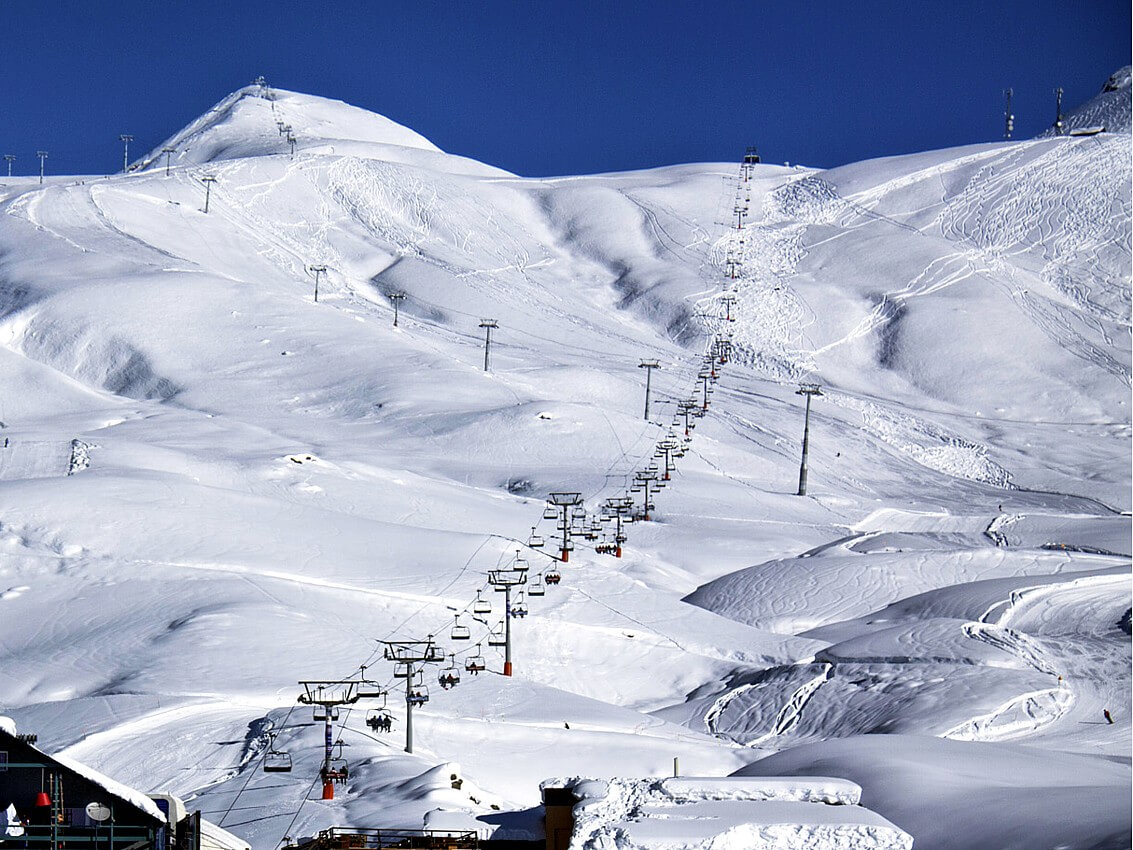 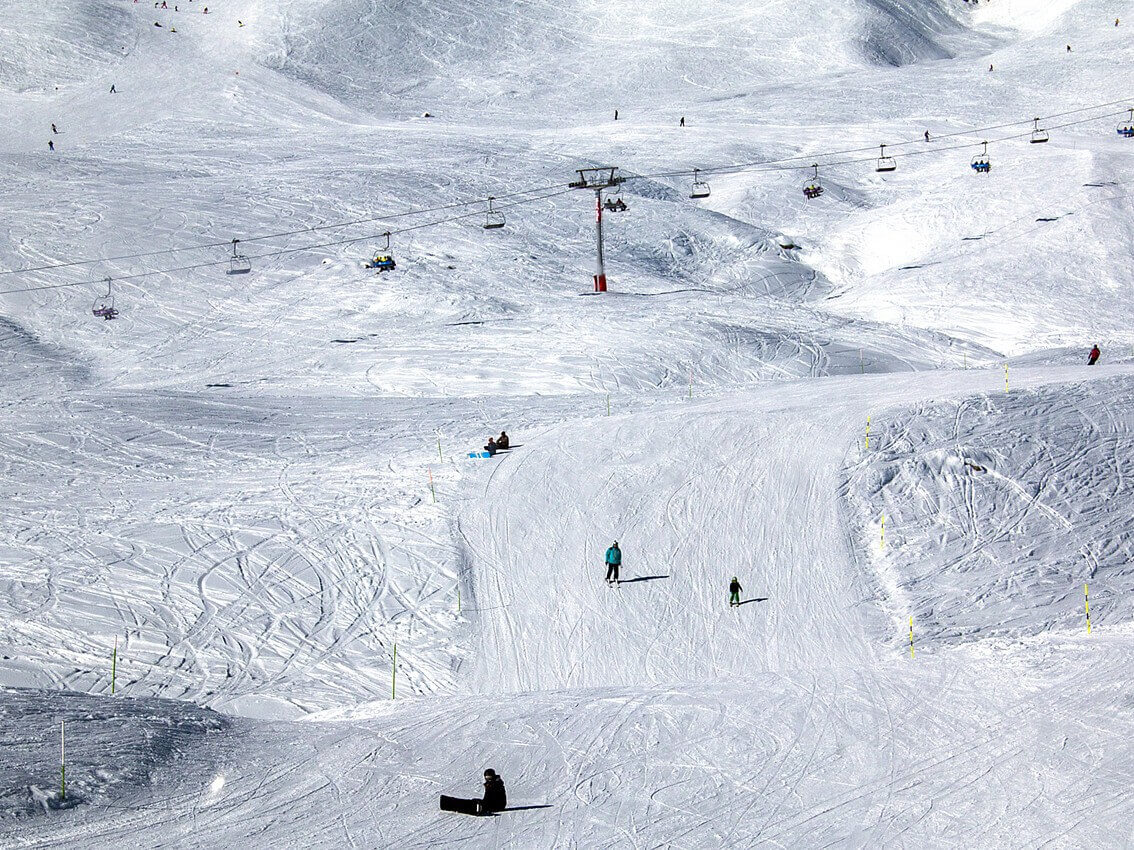 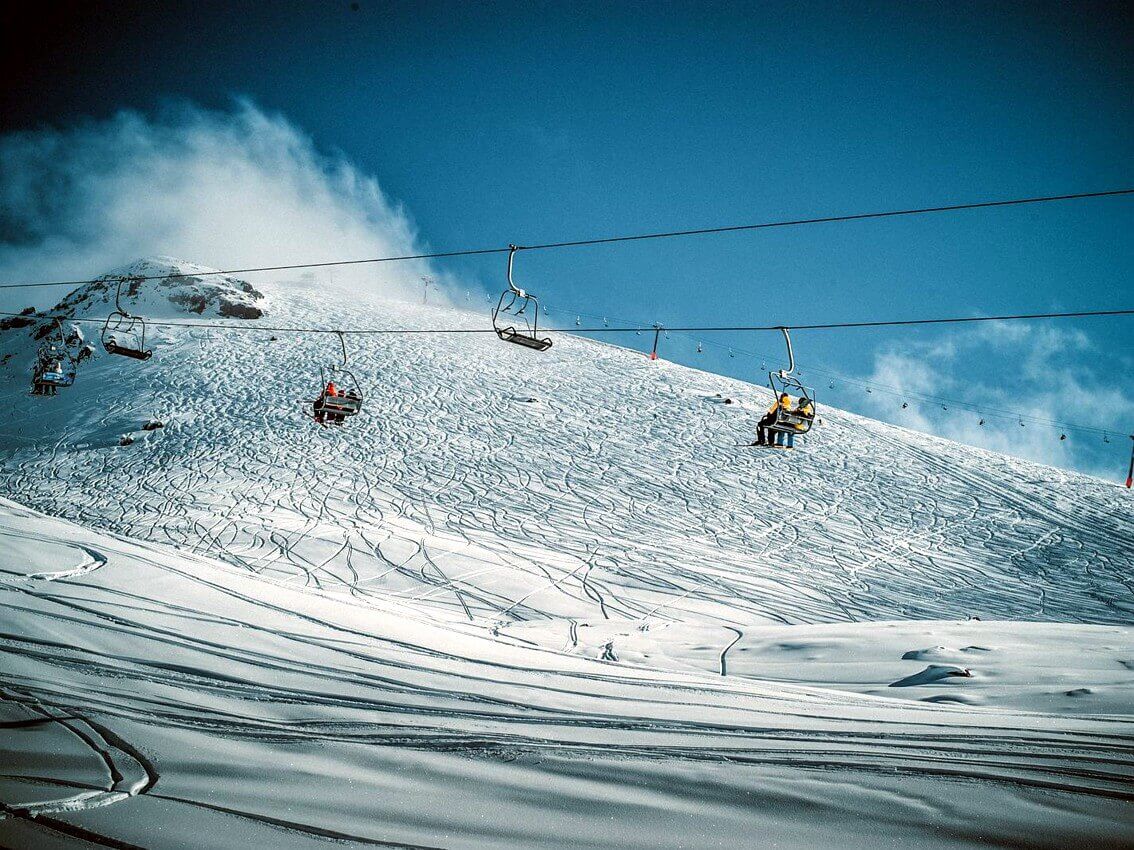 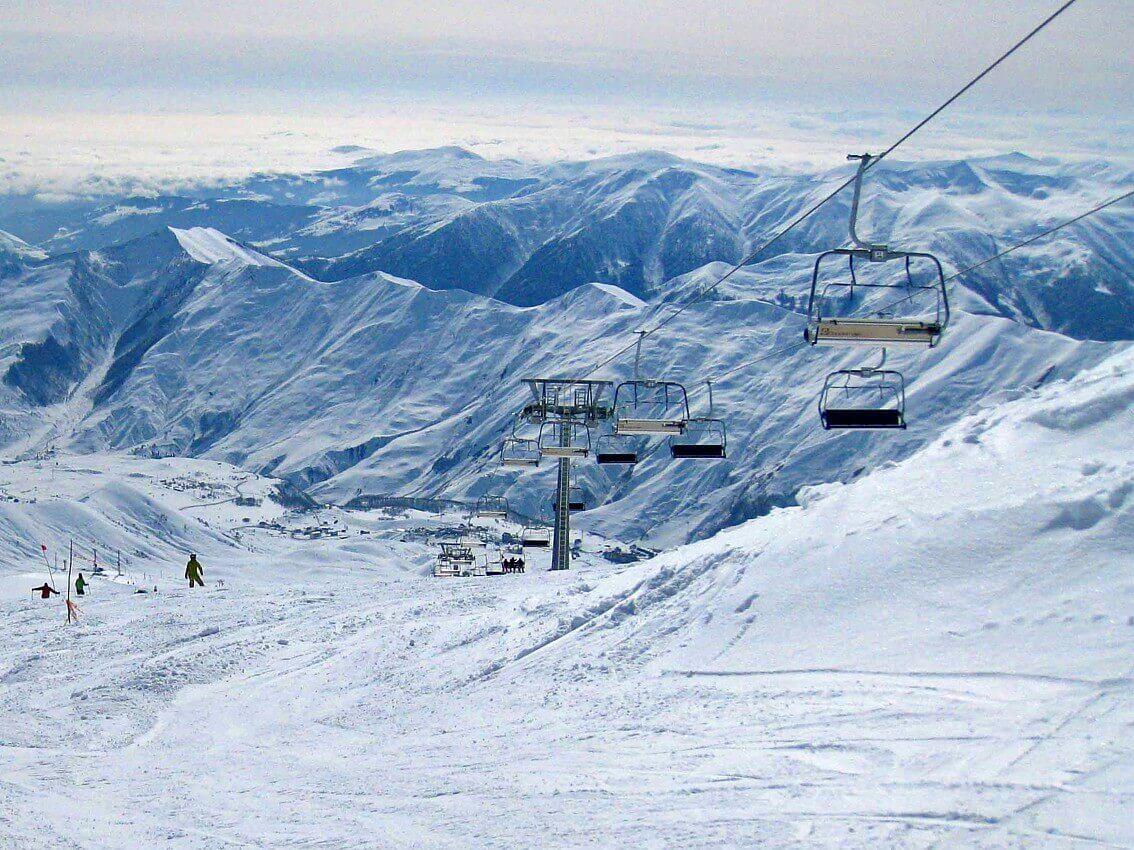 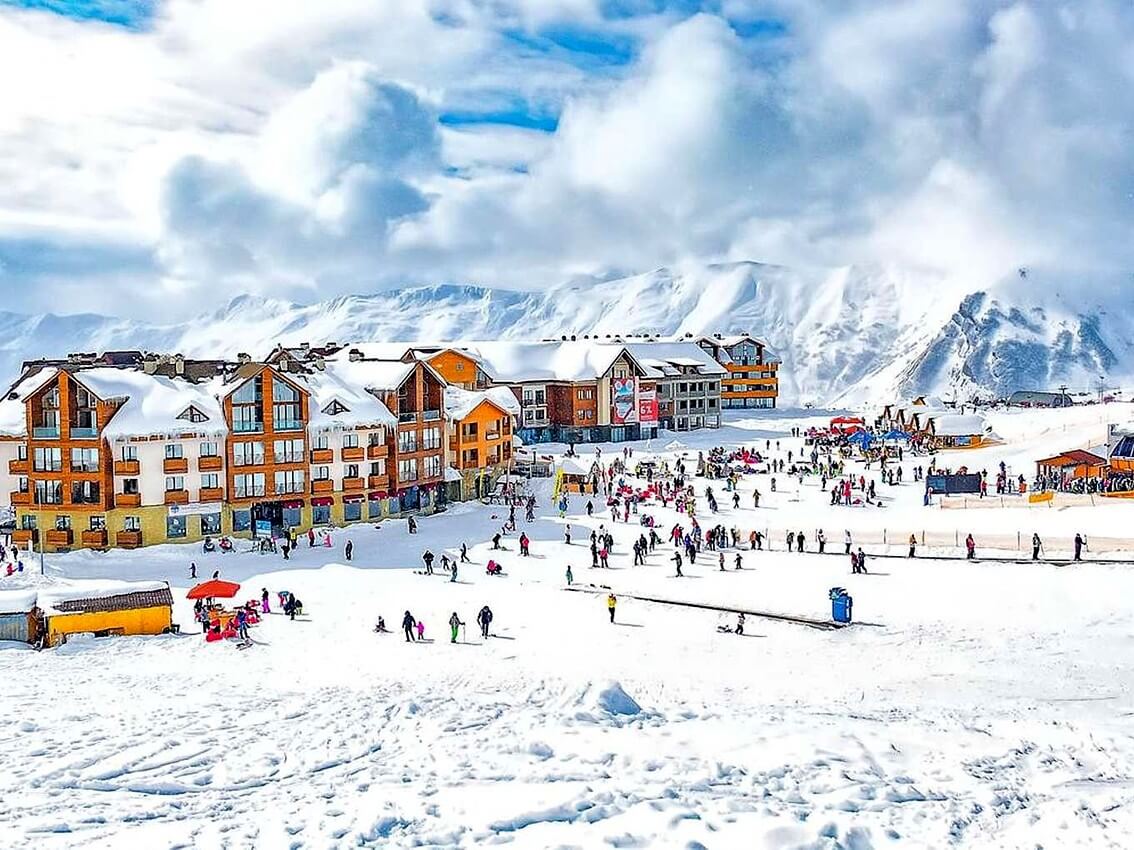 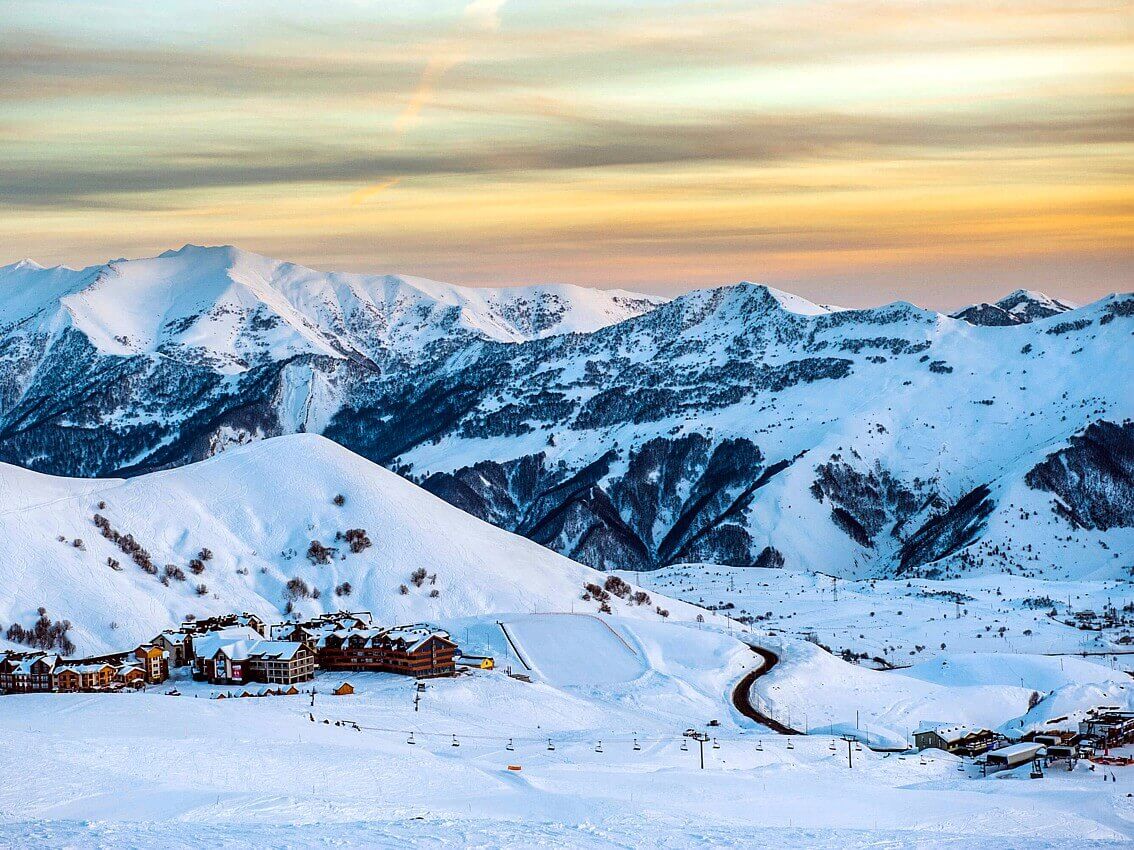 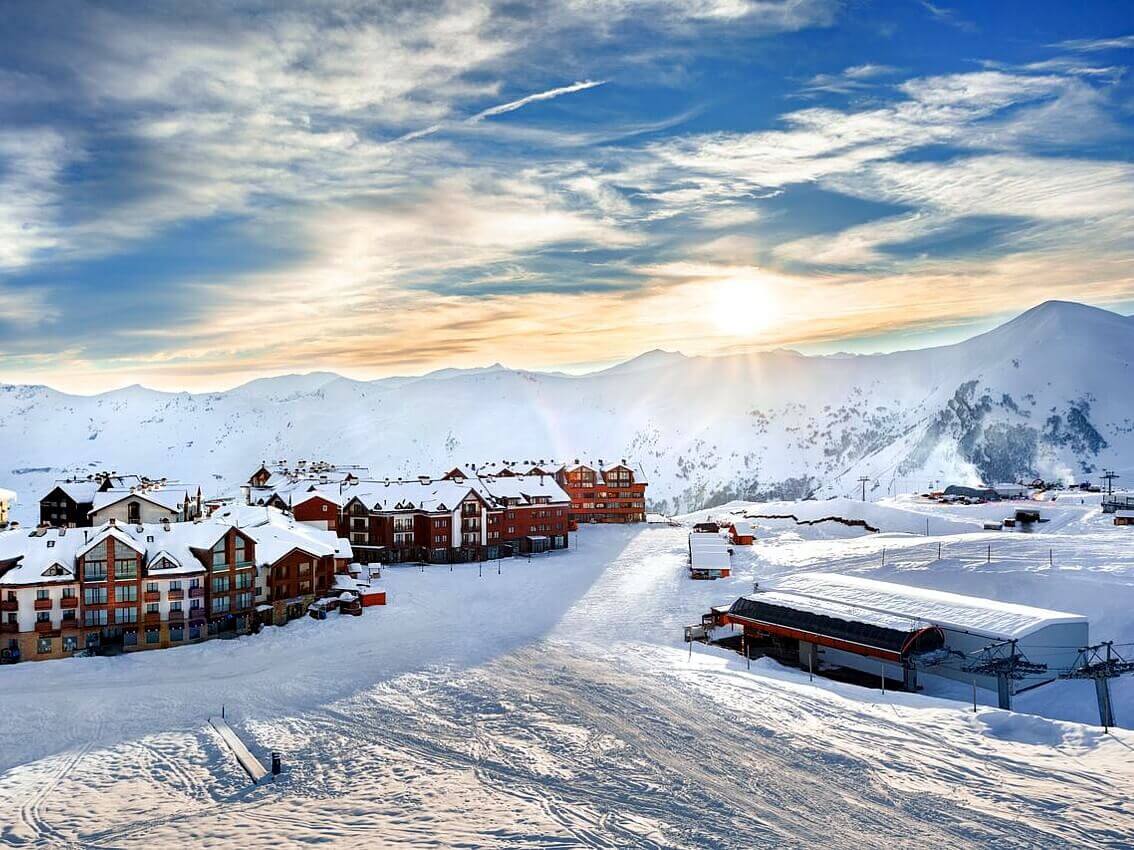